About Us » School History

Most historians date the beginning of the modern civil rights movement in the United States to December 1, 1955. That was the day when an unknown seamstress in Montgomery, Alabama refused to give up her bus seat to a white passenger. This brave woman, Rosa Parks, was arrested and fined for violating a city ordinance, but her lonely act of defiance began a movement that ended legal segregation in America, and made her an inspiration to freedom-loving people everywhere.

Rosa Parks was born Rosa Louise McCauley in Tuskegee, Alabama to James McCauley, a carpenter, and Leona McCauley, a teacher. At the age of two she moved to her grandparents' farm in Pine Level, Alabama with her mother and younger brother, Sylvester. At the age of 11 she enrolled in the Montgomery Industrial School for Girls, a private school founded by liberal-minded women from the northern United States. The school's philosophy of self-worth was consistent with Leona McCauley's advice to "take advantage of the opportunities, no matter how few they were."

Opportunities were few indeed. "Back then," Mrs. Parks recalled in an interview, "we didn't have any civil rights. It was just a matter of survival, of existing from one day to the next. I remember going to sleep as a girl hearing the Klan ride at night and hearing a lynching and being afraid the house would burn down." In the same interview, she cited her lifelong acquaintance with fear as the reason for her relative fearlessness in deciding to appeal her conviction during the bus boycott. "I didn't have any special fear," she said. "It was more of a relief to know that I wasn't alone."

After attending Alabama State Teachers College, the young Rosa settled in Montgomery, with her husband, Raymond Parks. The couple joined the local chapter of the NAACP and worked quietly for many years to improve the lot of African-Americans in the segregated south.

"I worked on numerous cases with the NAACP," Mrs. Parks recalled, "but we did not get the publicity. There were cases of flogging, peonage, murder, and rape. We didn't seem to have too many successes. It was more a matter of trying to challenge the powers that be, and to let it be known that we did not wish to continue being second-class citizens."

The bus incident led to the formation of the Montgomery Improvement Association, led by the young pastor of the Dexter Avenue Baptist Church, Dr. Martin Luther King, Jr. The association called for a boycott of the city-owned bus company. The boycott lasted 382 days and brought Mrs. Parks, Dr. King, and their cause to the attention of the world. A Supreme Court Decision struck down the Montgomery ordinance under which Mrs. Parks had been fined, and outlawed racial segregation on public transportation.

In 1957, Mrs. Parks and her husband moved to Detroit, Michigan where Mrs. Parks served on the staff of U.S. Representative John Conyers. The Southern Christian Leadership Council established an annual Rosa Parks Freedom Award in her honor.

After the death of her husband in 1977, Mrs. Parks founded the Rosa and Raymond Parks Institute for Self-Development. The Institute sponsors an annual summer program for teenagers called Pathways to Freedom. The young people tour the country in buses, under adult supervision, learning the history of their country and of the civil rights movement. President Clinton presented Rosa Parks with the Presidential Medal of Freedom in 1996. She received a Congressional Gold Medal in 1999.

When asked if she was happy living in retirement, Rosa Parks replied, "I do the very best I can to look upon life with optimism and hope and looking forward to a better day, but I don't think there is any such thing as complete happiness. It pains me that there is still a lot of Klan activity and racism. I think when you say you're happy, you have everything that you need and everything that you want, and nothing more to wish for. I haven't reached that stage yet."

Mrs. Parks spent her last years living quietly in Detroit, where she died in 2005 at the age of 92. After her death, her casket was placed in the rotunda of the United States Capitol for two days, so the nation could pay its respects to the woman whose courage had changed the lives of so many. She is the only woman and second African American in American history to lie in state at the Capitol, an honor usually reserved for Presidents of the United States. 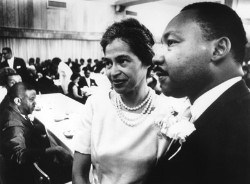 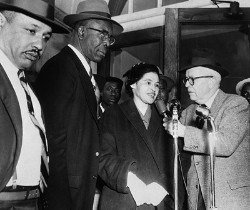 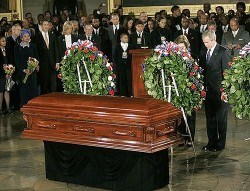 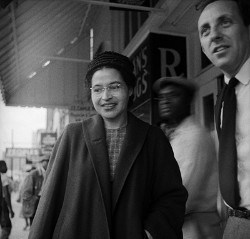